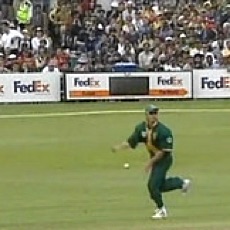 In June, 1999, after a shaky start, Australia's World Cup campaign had developed the momentum of a runaway freight train, which perhaps explained its popularity with bleary-eyed fans back home.

Part of the thrill of watching that campaign was the sense that, like any decent runaway train, it could career off the rails at any moment.

Certainly, Shane Warne had that sense. But he also had a solution. The night before Australia played South Africa at Headingley in the last Super Six game, Warne told his team-mates to stand their ground if Herschelle Gibbs took a catch.

His rationale was two-fold. Firstly, Gibbs had taken to tossing the ball away dismissively in faux-cool fashion after taking a catch, in an attempt to further demean the caught batsman. Your wicket is not even worth celebrating, was the underlying message behind Gibbs' contemptuous casting aside of the ball. So quick was Gibbs' disdainful discarding that if the slightest thing went wrong with his posturing, the catch could easily be transformed into a drop under the Laws of the game.

Secondly, because Warne was a witch, he had foreseen that Gibbs would do exactly that the very next day.

And so Herschelle Gibbs dropped the World Cup.

On its own, dropping the World Cup would have been enough for Gibbs to make the list of the forty funniest cricketers of all time. It might have even been enough to guarantee him a top twenty spot. There's endless comedy to be mined from South Africa's inglorious World Cup exits, and any significant players in those exits should be rewarded for their contributions.

The fact that any significant drop in any cricket match is now invariably followed by wags suggesting that player X has dropped trophy Y, where ideally trophy Y is as insignificant and meaningless as possible, is testament to Gibbs' place in cricket comedy history.

But Herschelle's claim to comedy greatness doesn't end with simply dropping a World Cup. A few years later, he was the driving force behind the greatest ODI run chase of all time, blasting 175 from 111 balls as the South Africans chased down 434 runs from their fifty overs. This game earned the great Mick Lewis a place on this list and now plays its part in earning Gibbs a top ten spot.

Was his batting that day particularly humorous? No. Not unless you take into consideration that he was hungover at the time after drinking until 1am the night before. Sure, Ian Chappell would have you believe that Doug Walters performed similar feats of unprofessional batting idiocy all through his career. But Doug never chased down 434 runs in an ODI.

Oh, and Doug Walters also never agreed to a $15,000 offer from Hansie Cronje to score less than 20 in an ODI, then apparently forgot he was supposed to do so, hit his first two balls for four and went on to score 74 from 53 balls.

Because that was also something Herschelle did.

Classic stuff from Herschelle, who couldn't even spot-fix without messing the whole thing up by being too talented for his own good.

Previous: The seventh funniest cricketer of all time

Next: The fifth funniest cricketer of all time