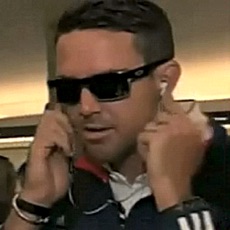 Actually, we don't need to talk about that. But the fact that so many articles about KP contain that reference to the book/movie We Need To Talk About Kevin, in which the titular Kevin is a psychopathic murderer who goes on a homicidal rampage, is perhaps suggestive of the impact Pietersen has had on English cricket.

Except, y'know, more funny because a) he's not fictional and b) he hasn't actually killed anybody (that we know of).

We begin at, oh, let's say the 2005 Ashes. KP had played some ODIs prior to that and, indeed, had briefly sported the appropriately showy average of 234.00. But the 2005 Ashes is where he announced himself on the cricket stage, with his final day counter-attack against Brett Lee securing England the Ashes and, more importantly, KP an MBE.

But KP had also announced himself as a funny cricketer. Before the series began, he was locked in a tussle with Graeme Thorpe for a single spot in the England batting line-up. KP got the nod by virtue of having an infinitely sillier hair-style, his infamous skunk haircut. When the selectors confirmed that Thorpe's hair sadly resembled no animal in particular, the England veteran was forced to give way to the up-and-coming comedy superstar.

From this literally wrong-headed start, a grand cricketing comedy career was born. One of his early nicknames was 'FIGJAM' ('fuck I'm good, just ask me'). It should have been more specifically 'FIGACJAA' ('fuck I'm good at comedy, just ask anybody'), but that just messes up the joke. And KP is not a man to mess up a joke.

There was Adelaide in 2006-07, where KP pulled off comedy moments in both his batting innings. In his first innings, he ran himself out for 158, presumably under the misapprehension that because this was his highest score (he'd reached it twice before), he wasn't permitted to score any more runs than that. Then, in the second innings, KP led one of the great team comic performances of all time when he was bowled behind his legs by Shane Warne - a feat that he'd claimed was impossible in almost all of his early biographies.

The 2006-07 Ashes series seemed to trigger KP's innate gifts for hilarious cricket antics. The following English summer against the West Indies, he had Dwayne Bravo knock his helmet off and onto his stumps to dismiss him hit wicket.

Then against India later that summer, he edged the ball behind, walked, and then unwalked once he saw the replay. Emboldened, he tried to pull off a similar trick when England toured Sri Lanka, again halting his departure from the ground after seeing the replay of a juggled catch between Chamara Silva and Kumar Sangakkara.

This was a man at the peak of his comedy powers.

Or so you'd think. Because he then went on to captain England.

Pietersen's captaincy was a glorious blazing shit-show of nonsensical controversy. With Michael Vaughan carelessly falling on his sword following the traditional South African tour o'culling, Pietersen became captain of both the Test and ODI sides for what turned out to be three and ten games respectively. In the process, he led England to a 0-5 loss in an ODI series against India, squabbled with the coach, had that squabbling leaked to the press, denied he had leaked the rift with the coach to the press, waited for the coach to be removed by the ECB, then resigned as captain, then claimed he hadn't meant to resign, but was told he had to.

I'll be honest. I'm not a hundred percent sure I've got the details of that right. But I take some solace in the fact that I don't think anybody involved could be sure of getting it all right either. All we know is that it was a thrilling ride, and a harbinger of things to come. Because for the rest of his career, most of KP's comedy would take place off the field.

Oh, sure, he'd have occasional grand on-field moments. Like the time in the 2010/11 Ashes where he was given not out on review, and then immediately confessed to Ponting that he'd hit it. A delicious piece of shit-stirring, precisely targeted.

But more and more it would be the dressing room squabbles with team mates that would be KP's comic focus. There were alleged text messages to South African players about how much he disliked his captain and coach. This triggered wide condemnation, an explanation via YouTube, an axing and, eventually, a reintegration into the side.

There was also the 'KP Genius' parody Twitter account, which KP believed was run by his team mates, or, at the very least, a mate of Stuart Broad's.

All of the dressing room nonsense came to a head during the 2013/14 Ashes tour. With his side thrashed 0-5 in the Tests, a now profoundly deaf KP was accused of the heinous crimes of whistling and looking out of windows and shown the ECB door (presumably because he'd already seen the window).

He was unselected for England's next tour, triggering an endless series of think-pieces about the man and what should be done about him, almost all of which began with the phrase 'We need to talk about Kevin'.

Which brings us just about full circle. There have been smaller comic bits in T20 tournaments from KP since then, of course. But like 70 year old Pythons creakily (dead) parroting their classic sketches on stage, it's not quite the same.

Kevin Pietersen ended his career as arguably the best batsman in his side, but sacked because nobody in that side liked him. Along the way, he was a constant source of larger-than-life absurdity. And for that reason, he is the seventh funniest cricketer of all time.

He'll bat at three in our Funniest Cricketer's First XI. Right up until the moment he's controversially sacked.

Previous: The eighth funniest cricketer of all time

Next: The sixthfunniest cricketer of all time