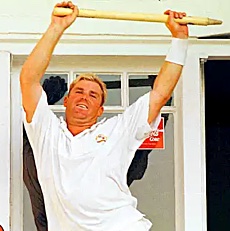 Let's make one thing perfectly clear. If this list was based around actions off the field, Warne would be number one and it wouldn't even be close. Why, just his Twitter feed alone - the single greatest parody Twitter account in history with its endless supply of 140-character nonsense screeds encased in the technicolour dreamgibberish of emojis, exclamation marks and selfies – would get him the top spot. But when you throw in everything else ludicrous that the great man has done since he retired (as well as his extra-curricular activities during his career), you have a comedy powerhouse second to none.

The mural. The endless bitching about Steve Waugh. The Warnifesto. The I'm A Celebrity, Get Me Out Of Here run where he was bitten on the face by a goddamn snake for our entertainment. And, y'know, a thousand other things from which we can all pick our favourites.

FFS, the man was somehow engaged to Elizabeth Hurley. Apparently just as some kind of extended bit. Warne is working on a whole other level of comic absurdity from the rest of us and, for that, I salute him.

On the field? Well, he still had his moments. Not quite enough to crack the top twenty of the funniest cricketers of all time, but good enough to be just outside that list of elite comic players.

Let's go through them. And for consistency's sake, I'm mostly going to ignore those moments where he made us laugh with improbably brilliant pieces of skill. Yes, it was funny to see Warne bowl some clown behind, through or past his legs with a delivery that was somehow both a) utterly startlingly and b) something we had come to expect. But that's more good cricket than funny cricket. And I'm not opening that can of worms. Go make your own damn 'forty cricketers who most delighted us with their outrageous skill' list if you so badly want one.

There was the squabble with Marlon Samuels - I've already covered that and given most of the credit to Marlon, but Warne's contribution is certainly very funny too.

Then there were the celebrations, which I consider sufficiently tied to the game that they're part of his cricket rather than his illustrious off-field comedy career.

The famous one is his stump dance after winning the 1997 Ashes. And it's certainly quality dickwaddery.

But I'm also a fan of the subtler comedy of the 1999 World Cup celebrations where Warne ensures he's the only team member in a tracksuit top. The man himself would no doubt explain that it was just because he was cold. But one can't help but feel there's also a certain subtext of defiance, particularly when the souring relationship between Warne and Waugh is taken into consideration. Granted, it's not a laugh-out-loud moment of uber-hilarity. But I must admit it's always tickled me.

As mentioned, Warne's bowling was mostly too good to be funny, but his batting had its moments. Most notably, perhaps, his top score of 99 against New Zealand, where he successfully avoided becoming a Test centurion by mindlessly slogging Daniel Vettori into the hands of Mark Richardson at deep midwicket. The kicker, of course, being that Vettori had bowled a no ball that went deliciously uncalled.

In the field? Well, there was his effort to drop a slips catch that would have given Damien Fleming his second Test hat trick. Not a particularly funny fumble on its own. Just a regulation slips drop. But the thing about Warne was that he was always a big moment player. And spilling a hat trick is about as big a comedy moment as it gets.

Well, that and dropping the player who's about to win England the Ashes for the first time in living memory.

And finally, there was perhaps his finest moment on the field. A moment that he didn't even take part in. Because it was definitely a cameraman who did it. And totally not Shane Warne at all. But we're going to credit it to Shane here, because he was the one cruelly blamed for it when my legal advice agrees with me that he was totally not the person who did it. Not in any way. No sir. Definitely not him.

I refer, of course, to the time that somebody other than Warne opined that Scott Muller was incapable of both bowling and throwing.

The best thing about the Scott Muller incident that has absolutely nothing to do with Shane Warne is that he's still forced to talk about it. Why, as recently as the Second Test between Australia and South Africa in 2016-17, he was forced to talk about it on commentary, where he got sufficiently worked up about it that he ignored Khawaja's boundary and then concluded by declaring that even though he didn't say it, he probably totally agreed with the mystery person who said that Muller couldn't bowl and throw anyway.

But we're starting to cross back into off-field stuff now. So that'll probably do it. While Warne is not quite the comedy legend on the field that he is off it, he remains a very strong funny cricketer indeed. After all, just because Alan Moore's run on Swamp Thing isn't as strong as Watchmen, that doesn't mean that his stories about the DC plant elemental aren't great comic books in their own right.

And just like Moore's bog monster funny books, Warne's comedy cricket career is a strong body of work. Certainly strong enough to see him finish as the twenty-first funniest cricketer of all time.

Previous: The twenty-second funniest cricketer of all time

Next: The twentieth funniest cricketer of all time