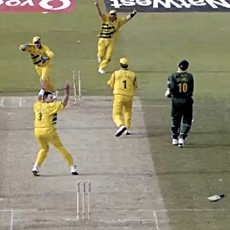 Mel Brooks once famously said: 'Tragedy is when I cut my finger. Comedy is when you fall into an open sewer and die.'

And there is arguably no grander moment of cricketing sewer-falling death than the final wicket in the 1999 World Cup semi-final between Australia and South Africa.

Of the almost 4000 ODIs ever played, that game is perhaps the best of them all, a tussle between some of the greatest players in the history of limited overs cricket, see-sawing back and forth until it settled on the closest possible result in a match that could only be more important if it was the final.

And to end in the tragicomic moment like it did? Exquisite.

I could (and, indeed, have) write more about the final moments of this game, but the crux of it is this - Lance Klusener, the eventual player of the tournament, had yet again bludgeoned South Africa to the brink of victory. With nine runs needed in the final over, he'd hammered Damien Fleming's first two balls for four to level the scores.

Donald, who had not, and would not, face a single delivery, somehow managed to almost run himself out from the third ball of the over, backing up too far, only for Darren Lehmann to miss with an underarm throw.

That would have been a funny enough moment. Almost all run outs have some element of comedy to them - there's either confusion, carelessness or a calculation cock-up involved, and any combination of those three factors can produce an amusing bit. But Donald had something much stronger in mind than merely being hilariously run out backing up too far.

For when the fourth ball was clubbed by Klusener to Mark Waugh at mid-off, Donald's first thought was to retreat back to his ground. He'd learnt his lesson from the previous near miss. No way he was falling into that trap again.

And then, once safe in his ground, he looked back up and over his shoulder. And saw the terrifying-on-every-level spectre of Klusener joining him at the non-striker's end for his half of the winning run.

Can you imagine the horror that Donald must have experienced at that moment? The realisation that everything suddenly relied upon him somehow getting to the other end before the ball did?

Nothing mattered any more. Was it a good call? Was it a bad call? Should they have waited for a cleaner stroke from Klusener from either of the last two balls? It didn't matter. Klusener was there. And the entire result of the match now rested on whether or not Donald could complete the run.

Gloriously, in a moment of perfect comic instinct that he had never displayed previously and would never display again, Donald then dropped his bat.

By this stage, Waugh had back-hand flicked the ball to Fleming. And Fleming, with his comic instincts also sharpened by the pressure of the moment, decided that the best way to accentuate the futility of Donald's desperate run was to roll the ball to Gilchrist, so it was literally racing Donald down the pitch.

Needless to say, the ball won the race, Gilchrist smashed the stumps down in jubilation, Donald slumped his shoulders in despair and Klusener just kept running as the comedy-loving crowd stormed the field.

And that was that.

This is dark and cruel comedy, to be sure. But it's definitely a funny moment (imagine the Curb Your Enthusiasm music playing as Gilchrist smashes the stumps to pieces if you don't believe me).

And, given its historical context, it's enough to make Allan Donald the twentieth funniest cricketer of all time. Let's just hope that in another thirty or so years he'll be able to appreciate it.

Previous: The twenty-first funniest cricketer of all time

Next: The nineteenth funniest cricketer of all time