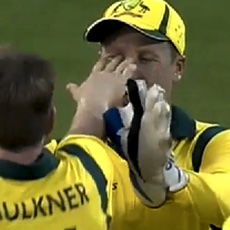 The 2013/14 Ashes that Australia won 5-0 is mostly thought of as the series where Mitchell Johnson peaked as a cricketer, with all the sporadic talent that had previously only been hinted at in Tests here or there suddenly coming together in a run of phenomenal consistency that left England utterly shellshocked.

Well, yeah. Maybe. But I always think of it as the series where Brad Haddin did exactly the same thing, but as a funny cricketer.

Now, this might not strike anybody as particularly hilarious. Surely it's just a case of a wicketkeeper coming to his team's aid with quality batting down the order. But that's only because we don't (yet) have a proper statistical measure for the hilariousness of an innings. Because Haddin's runs were compiled almost entirely through streaky slogging, skied outfield hits that invariably fell between fielders, outside edges that flew over slips and every other maddeningly lucky shot that you can imagine. If fortune favours the brave, then Brad Haddin must be the most courageous person who ever lived.

I'd put in a video of all of Haddin's amusing batting in that series, but the internet doesn't seem to have made such a compilation. Come on, YouTube. Sort this out.

For now, you'll just have to trust me. Or ask an English cricket fan. They'll tell you all about 'fucking Brad Haddin' in that series. Because not only did he ensure Australia had decent first innings totals for Johnson to exploit, he did it in the single most infuriating way possible for England fans. Johnson was the scintillating sizzle of that Ashes series, but Haddin was the slapstick steak, and he will live forever in my memory as Australia's finest keeper of the last thirty years because of it.

But as I said, Haddin's Ashes were a culmination of a strong career of comedy cricket leading up to it. Here are just a few choice moments in Haddin's career.

There was the time James Faulkner poked him in the eye.

There was the time he knocked the bails off against New Zealand and successfully claimed that the batsman was bowled.

There was the time he injured his shoulder solely so fans could get the very funny experience of seeing a joyous Dave Warner take the gloves.

And, of course, there was his wild slog as part of Australia's 47 all out against South Africa. Because if your frenetic hitting can't hilariously save your team and drive the opposition crazy, then it should at the very least do the exact opposite.

Brad Haddin, you had an outstanding career as a quality comedy cricketer. And you are the nineteenth funniest cricketer of all time.

Previous: The twentieth funniest cricketer of all time

Next: The eighteenth funniest cricketer of all time