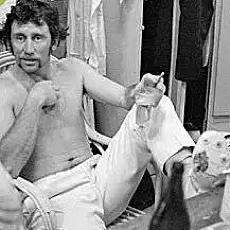 And so we come to Ian Chappell, a man who's never met a topic he didn't have an unshakeably dogmatic opinion on, and who has never hesitated to impart said opinions to anybody within listening range via the most aggressive use of 'Mate' you've ever had blasted at your ears.

I've been finding it difficult to put into words exactly what it is I find so funny about Ian Chappell. This is about my tenth attempt to write this entry. So, screw it. let's cheat and put it into Chappelli's words instead.

Here's one of his anecdotes that I've heard many times over the years, concerning Dennis Lillee attempting to announce his retirement after the first season of World Series Cricket.

I started to sense a retirement speech.

I became even more convinced when he thrust out his right mitt and said, "Shake me by the hand".

"I don't shake the hand of medium-pacers," I said, "only fast bowlers."

I had a fair idea what was coming and was half-prepared. It still didn't help much when the punch landed right in my guts.

"Sorry, mate," I managed to splutter, "only fast bowlers, not medium-pacers."

I was better prepared the second time as the punch landed in the same spot.

By the third punch I was almost immune.

(excerpted from The Herald Sun)

This is surely madness, isn't it? Who behaves like this? Hell, if anybody ever punched me in the stomach, I'm pretty sure I'd just fall down and start crying.

But this kind of shit seemed to be commonplace in the Australian teams of the 1970s. Doug Walters was always smoking, playing cards and on the piss. Rod Marsh and Dennis Lillee were betting on the opposition. Jeff Thomson liked seeing batsmen get hit more than he did getting them out. Len Pascoe and Rodney Hogg may have suffered from genuine lunacy. And the lot of them teased Kim Hughes until he quit the entire thing in tears.

This entire era of Australian cricket seems like the kind of thing that might have been concocted from the worst kind of hack sitcom writing session by a group of tired English TV writers drawing on every stock Australian stereotype they could think of and smooshing them all in there without any fear of stretching the boundaries of disbelief. 'More absurd macho bullshit!' 'More drinking all the time!' 'More interminable swearing!!'

And, of course, 'More seemingly normal conversations that rapidly escalate to people punching one another in the stomachs for no immediately obvious reason whatsoever!!'

It's all so utterly, utterly ridiculous.

And yet. And yet. It all seems to have actually happened. Now I'm just a little too young to remember 1970s cricket with any great clarity. But, Sir Ian Botham notwithstanding, there doesn't seem to be much doubt that this kind of behaviour took place. Off the field. On the field. In the dressing rooms. In other teams' dressing rooms. These half-crazed maniacs just went ahead and behaved like this wherever they went. And apparently without even that many people at the time calling it out as deeply, deeply deranged.

Having said that, the sitcom Love Thy Neighbour also existed around this time, so I think we just have to accept that the 1970s was an extraordinary era and be done with it.

I'm once again not sure I've explained very well why I find the stories of this era so funny. And, if not, I apologise. But it's my damn list and even if I haven't justified it fully there's no doubt in my mind that this genuinely psychotic group of men who are so completely alien to my experience in everyday life in Australia and yet who carried on like this in my lifetime must surely be some of the funniest cricketers who ever lived.

And since Chappell was their leader, and also the person via whom I've heard most of these tales, he gets the nod.

Congratulations, Chappelli. You (and your batshit insane cricketing teammates) are the 25th funniest cricketer(s) of all time.

Previous: The twenty-sixth funniest cricketer of all time

Next: The twenty-fourth funniest cricketer of all time