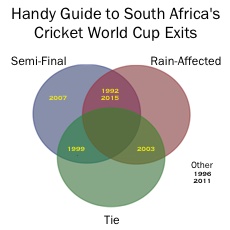 Almost from the moment South Africa returned to international cricket back in 1992, they staked out their comedic terrain and have defended it heroically ever since.

Within this seemingly limited field of humour expertise, the comedic virtuosi of South Africa contrive every four years or so to weave fresh humour from just a few raw ingredients – ties, rain and semi-finals.

Those three elements are mixed and matched in ever-changing ways, as I've previously noted via the following Venn diagram.

Here's what they came up with in 2003. It was a World Cup they hosted and were expected to dominate. Or, at the very least, co-dominate along with the very unfunny Australian team of the era.

Instead, they found themselves in a position where they needed to beat Sri Lanka in their final game merely to qualify for the Super Six stage.

Naturally, rain began to fall. Equally naturally, South Africa fought hard, with Mark Boucher smashing a six to reach the Duckworth Lewis par score with one ball remaining before the umpires would surely take the players off for the previously mentioned rain.

But then, rather than try to score the match-winning run off that last ball, Boucher blocked it to mid-wicket and refused the single.

Brilliantly, inexplicably, hilariously, the South Africans had read the Duckworth Lewis sheet wrong, mistaking the match-tying total for a match-winning one.

Why does Mark Boucher get the comedic credit for this bit ahead of captain Shaun Pollock? I’m glad you asked. Read on.

Outside of their World Cup exits, the South Africans aren't a particularly funny bunch. They prefer to drop out of the comedy cricket scene in non-World Cup years so they can heighten their focus on preparing for their regular quadrennialish show, like some kind of cricketing Cirque du Soleil. Except, y'know, entertaining.

Yes, they'll do the odd pop-up improv spot where they bat for a draw for far longer than any other team would ever deem reasonable. (And, occasionally, even when other teams might imagine that they were just three overs short of a win.)

But outside of World Cups, they're mostly boring, methodical, robotic cricket machines.

Having said that, here's Mark Boucher sledging Tatenda Taibu in a Test.

This is the kind of thing one imagines that all wicket keepers are always doing at all times like the interminably annoying pricks they all undoubtedly are. But capturing it in this one instance on the stump microphone is enough to get Boucher the overall nod over Pollock, whose sole other claim to comedy fame is that he's a redhead.

And that just doesn't cut it. Not these days.

Congratulations, Mark Boucher. You scrape into the forty funniest cricketers of all time at number 36.

Previous: The thirty-seventh funniest cricketer of all time

Next: The thirty-fifth funniest cricketer of all time