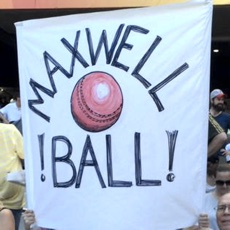 Cricket is the greatest sport in existence. That's an established scientific fact.

But there is a better sport than cricket. A sport not yet in existence. A sport that currently exists only in the mind of one mad cricketing genius. A sport that I have been calling, for lack of a better word, Maxwellball.

Ordinarily, I'd describe Maxwellball as being a hundred times better (and by 'better', I mostly mean 'funnier', of course) than cricket. But such a description is not fitting for Maxwellball. It's too confined by an overly decimal-centric multiplier along the real number line.

No, Maxwellball is more like (93+88i) times better than cricket, where i is the symbol for the square root of minus one, opening us up to the complex plane of numbers.

Because that's Maxwellball in a nutshell. In Maxwellball, there's no need to do anything in a simple way, when there's a complex, unexpected, brilliant, insane way to get it done instead.

Or, indeed, spectacularly fail to get it done.

Because that's also one of the exquisite joys of Maxwellball. Where most sports and, indeed, most life events, tend to tediously have the most likely events happening the most often, Maxwellball specialises instead in having the outlier events be the most common.

Is that paradoxical? Of course it is. It's Maxwellball.

Here are some of the things you can do in Maxwellball:

You can take a one-handed outfield catch while holding an ice cream.

You can be fined and dropped from the team because your wicket-keeper doesn't like the fact you want to bat above him.

You can find your team at 6/9 (that's six wickets down for nine runs, non-Australians), the lowest ever score for six wickets down in Sheffield Shield history and respond by scoring a 89 ball century, eventually making 127 in a total of 186.

You can clutch your shoulder while trying to field a ball in the outfield, in order to annoy Virat Kohli.

You can respond to being dropped from the ODI team by scoring 145* (65) in your very next innings, where for some reason you're opening the batting in a T20 match.

You can break your bat on your return to the Test side. And still score a century.

You can have that maiden Test century be the only time you've faced more than 98 balls in an international cricket innings.

You can win an ODI against Pakistan by bowling a double wicket maiden for the final over of the match.

You can leave a post-match interview to give Sachin Tendulkar a hug.

You can make your Test debut in India during the HomeworkGate series, and in your second Test open both the batting and bowling under your new captain Shane Watson.

You can take any number of absurd outfield catches juggling the ball over the boundary rope.

Or, if you can't be bothered taking it yourself, you can just parry the ball back to another fielder. Ideally, Rob Quiney.

You can be signed for a million dollars in the IPL just an hour or so after being dismissed for a golden duck in an ODI.

You can hit Australia's fastest ever ODI century, bringing it up in just 51 balls. You can do that in a World Cup match if you like.

Or you can ignore centuries altogether, recognising them as essentially only incrementally more meaningful than a score in the 90s. You can accentuate this point by being dismissed in the 90s three times before making your first ever ODI century. And then one time afterward.

You can hate being called The Big Show.

You can score 96 while chasing down 295 against India in an ODI, bring the scores level with eight balls remaining, be caught trying to hit a six to bring up a century, then commentate the actual winning runs from the edge of the ground.

And, of course, you can leave the first ball you face and have it crash into middle stump.

I could go on and on. And, indeed, I have. For goodness sake, I've even written a text adventure featuring the great man.

But I think you get the idea. Maxwellball is the greatest game anyone can conceivably imagine.

Alas, Maxwellball has only the one player so far - its creator, Glenn Maxwell. As such, he's forced to play the game within cricket, until the rest of the world recognise the superior sport he's invented and join him.

Let's hope they hurry up.

For his part in bringing Maxwellball to cricket and making all our lives a better and funnier place, I award Glenn Maxwell the ranking of the fifth funniest cricketer of all time.

He is, however, also the funniest Maxwellball player of all time.

And, obviously and fittingly, the least funny one too.

Previous: The sixth funniest cricketer of all time

Next: The fourth funniest cricketer of all time