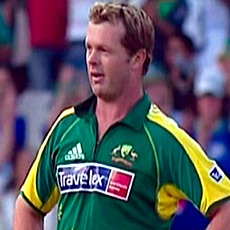 If there's one thing I've learned in the decades I've been watching cricket, it's this: learning only one thing in a few dozen years of watching a sport as all-consuming as cricket is an extraordinarily poor return on time spent.

So, it's a damn good thing I've learned more than just a solitary fact about the game.

For example, I've learned that Shane Keith Warne is an anagram of 'then he is a wanker'.

I've also learned that fans in every other country get disproportionately annoyed by Australians writing the score wickets-first, rather than runs-first.

But, perhaps most importantly, I've learned that when a side is defending their total of 4/434 from fifty overs, and fail to do so, then somebody's going to have done something pretty damn amusing.

When Australia failed in that exact task in their series-deciding ODI against South Africa on March 12, 2006, one man stood head and shoulders above the rest in terms of ridiculousness.

That man was Michael Llewellyn Lewis - 'Mick' to his remaining mates - whose figures of 0/113 off ten overs achieved instant infamy. (Note to non-Australian readers - Lewis took zero wickets and conceded 113 runs. He didn't take 113 wickets in the process of bowling ten maidens. But come on, you know that. So why change the order when you write out the team score? Show some internal consistency, people.)

Everything about Lewis's effort was comedy perfection. He didn't sully the humour by jagging a lucky wicket or two out of the nine that fell in South Africa's helter-skelter chase.

He also finished his full complement of ten overs - and, of course, credit must go there to captain Ricky Ponting who saw the slapstick potential in letting Lewis bowl out and went for it. In contrast, the humourless Graeme Smith pulled the similarly expensive Jacques Kallis out of the attack with four overs still unbowled.

And in taking the record for worst ever ODI figures, Lewis surpassed Martin Snedden's 2/105, which was amassed a quarter of a century earlier from twelve overs. Brilliantly absurd work to crush the previous record on so many different levels.

Of course, Lewis's record won't last. In fact, in an era where 300+ scores are becoming more and more the ODI benchmark, it's amazing it's lasted this long. But Mick Lewis will always remain the pioneer - the Roger Bannister of the ten-over triple-figure bowling record.

And yet, despite how darkly comic the entire effort was that day in 2006, what makes it a true work of comic genius was that the entire bit was apparently just a set-up for a later gag.

Because during the 2015-16 Sheffield Shield final, Mick Lewis made the news again, fined for ball-tampering after kicking the ball into the gutter then raking it across the concrete while picking it up in his role as Victoria's bowling coach.

An exquisite gag, ten years in the making. And for that, he's rightly the fourteenth funniest cricketer of all time.

Previous: The fifteenth funniest cricketer of all time

Next: The thirteenth funniest cricketer of all time