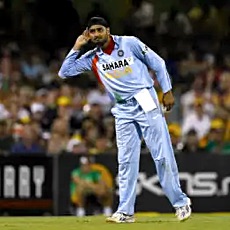 I've already praised the efforts of Sourav Ganguly in upsetting Steve Waugh during Australia's tour of India in 2001. But Ganguly's glorious shit-stirring leadership would have been easily brushed away if the unfunny Australians had continued their record streak of Test victories.

The reason they didn't do so was primarily because of two men - VVS Laxman and Harbhajan Singh.

Now, VVS Laxman isn't funny enough to make this list. He simply scored an absurd number of runs in breathtaking style. Entertaining stuff to be sure, but not particularly amusing.

But Harbhajan? Harbhajan is certainly a candidate for the list. Because Harbhajan was one of the great tormentors of Australia. His tormenting of Australia came partially from all the wickets he tended to take against them. Anybody who can force Steve Waugh to handle the ball - always one of the funnier dismissal methods out there, mostly for the sheer brain-fade moment the batsman goes through to lose his wicket in such a fashion - is doing okay.

But it was Harbhajan's swagger and attitude that most annoyed the Australians, to the point where Matthew Hayden would later call him 'an obnoxious weed'.

One of my very first Twitter arguments came in October 2013, when I made a half-hearted joke about Hayden failing to refer to some cooking spices he was using on a TV segment as obnoxious little weeds.

I mean, Hayden is the kind of person who will sit in a tiny chair to discuss relevant cricketing matters. You can't expect him to be up on the definition of 'noxious'.

Luckily, those days where somebody would use Twitter as a vehicle for baseless criticism are long in the past.

Hayden was later reprimanded for those comments about the Indian spinner. Which pretty much summarises Harbhajan's entire history with Australia. For like Loki in Norse mythology, Anansi the spider in West African mythology, or Bugs Bunny in Looney Tunes mythology, Harbhajan is a mischief-making cricketing trickster god, who seemingly spent his entire career serving a suspended ban for some piece of nonsense or other.

Whenever Australia would try to best him, he would wriggle out of it and somehow re-emerge back on top. He taunted them not just with his words, but also with his actions, whether it was doing a somersault after taking Ricky Ponting's wicket, hitting the series-winning runs in 2001 or taking the first ever hat trick by an Indian (with not just one, but two, wickets that, at the very least, would have merited another look in the modern age).

And this combination of smart-mouthedness backed up with cricketing talent (or perhaps vice-versa) drove the Australians batshit. As Hayden said in that same interview, 'There is a certain line that you can kind of go to and then you know where you push it, and he just pushes it all the time.'

Did Harbhajan eventually push it too far? I guess that depends on whose version of events you believe about the MonkeyGate scandal. And I'm making an executive decision here to stay well the fuck away from that can of comedy-free worms.

Eventually, after he countered a standard day of Australian sledging by asking Darren Lehmann if he was pregnant and then following it with a seven-wicket spell, the Australians finally gave up the fight against Harbhajan. The trickster god had at last defeated them.

But while tormenting opposition players is all well and good (except where it maybe isn't), that'd probably only earn him a spot in the thirties on this list. Twenties at best. To earn himself a spot in the teens, Harbhajan needed to make a team mate cry by slapping him.

And so he did.

Oh, sure, Sreesanth wasn't one of Harbhajan's Mumbai Indians during that first IPL season. But he was still a fellow Indian player. And while, in theory, we can't condone assault on the cricket field, in practice, it's just about impossible to deny the comic power of an unexpected slap.

Harbhajan was fined and suspended for that one. In retrospect, perhaps he should have claimed he'd merely caressed Sreesanth in some form of sign-Hindi.

So congratulations Harbhajan. You've pushed the line just enough with your off-putting brand of insult comedy to become the fifteenth funniest player in the history of cricket.

Previous: The sixteenth funniest cricketer of all time

Next: The fourteenth funniest cricketer of all time