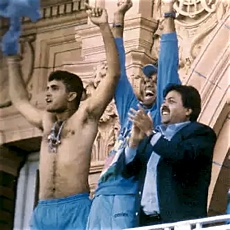 The turn of the century was a grim time for fans of cricketing comedy. Steve Waugh's desperately unfunny cricket team roamed the world, humourlessly crushing everybody who dared oppose them.

Which is why Sourav Ganguly's antics as India's captain were so brilliant. He found the chink in Waugh's apparently impenetrable mental armour, driving the Australian captain crazy in a manner that was both strategically brilliant and very, very funny.

It was the Test cricket version of What About Bob?

Ganguly began by questioning in the press whether Australia were really all that, pointing out that Australia's unbeaten run mostly took place at home, and included a thrashing of a hapless 5-0 drubbing of a pitiful West Indian side. So, what's up with that?

He then made Waugh wait for the toss at every possible opportunity, except for when the match referee warned him on his tardiness, at which point he showed up five minutes early to the next toss in his tracksuit top.

During the ODI series, he claimed to have won a toss he'd clearly lost, before celebrating a fifty in the final ODI by wiping himself down with a replica of Waugh's famous red rag.

Almost none of this had anything to do with the actual playing of cricket, which was what made it so brilliant. Ganguly was operating on a whole other level of mind games, mentally disintegrating the mental disintegrator.

By the end of the tour, the Australian's record run had extended to sixteen Tests, but then abruptly halted as they went down to a 2-1 series loss. The Australians technically won the ODI series 3-2. But by that stage, Ganguly had driven Waugh completely bonkers, which was the true victory.

Later in Ganguly's career, he'd go on to irritate Lord's folk by removing his shirt - partly in celebration, but mostly in a pisstake of Andrew Flintoff. Also fine, irritating, funny work.

No doubt some will suggest that Ganguly should be marked down because despite having the nickname of 'Dada', almost none of his comedy was evocative of dadaism at all.

But, in its way, isn't that the most dada thing imaginable? I'm saying it is.

Congratulations, Sourav Ganguly. You are a hilariously annoying prick of a man who drove Steve Waugh insane. That's enough to make you the twenty-seventh funniest cricketer of all time.

Previous: The twenty-eighth funniest cricketer of all time

Next: The twenty-sixth funniest cricketer of all time