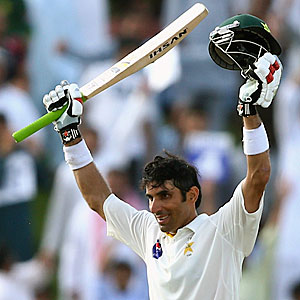 Some players are endless sources of comedy. We'll meet them as we slide further down this countdown. Those players are always doing hilarious things on a cricket field, constantly delighting us with their fresh and off-the-wall antics.

And then there's Misbah-ul-Haq.

Misbah had one spectacular arrow in his comedy quiver. And he used it perfectly.

Misbah made his Test debut in March, 2001. And for the next thirteen and a half years, he worked on his joke setup.

Over that time period, there were 186 top order batsmen who batted at least twenty innings. Misbah wasn't the slowest of those 186 batsmen – that would be too obvious – but he was well down the list of strike rates. 158th, to be precise, with a strike rate of just 41.66 runs per one hundred balls.

The defensive style of his batting over this lengthy career earned him the derogatory nickname of 'tuk tuk', which is an Urdu phrase for 'gosh, Misbah is batting very slowly again, isn't he?'.

He was, by any reasonable measure, a sluggish batsman. And he spent the better part of a decade and a half establishing that setup.

All so that on November 2nd, 2014 he could deliver the most exquisite punchline of them all.

For that was the day that Misbah scored the fastest Test fifty of all time. Then the equal fastest Test century of all time, taking just 21 balls for the former and a mere 56 for the latter.

If humour is founded, as many theorise, in the shock of defying expectations, then Misbah had pulled off one of the great comedy cricket moments of all time, spending 49 Tests to build expectations, only to utterly, hilariously, defy them in his 50th.

It's difficult to imagine a cricketer more dedicated to delivering a top tier joke than Misbah-ul-Haq. And that dedication makes him the 35th funniest cricketer of all time.

Previous: The thirty-sixth funniest cricketer of all time

Next: The thirty-fourth funniest cricketer of all time