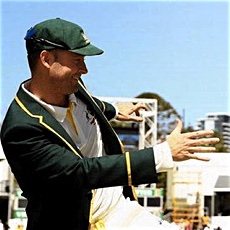 And so we come, perhaps inevitably (but perhaps also not), to Michael John Clarke.

Does Pup deserve to be on this list of the forty funniest cricketers of all time? I've gone back and forth on this one. On the surface of it, he certainly seems to have accomplished a lot in terms of comedy cricket. And yet I remain curiously unconvinced of his humorous merits. I can't really explain why. But I just don't feel it with Clarke.

This is, of course, remarkably similar to my feelings about his infinitely less important non-comedy cricket career too. Which suggests, well, something.

Still, I should put my feelings aside and look at the facts. Because that's what a professional cricketing comedy ranker does.

Here are just a few of Clarke's comedy highlights:

Here he is, warning Jimmy Anderson to expect a 'broken fucken arm'. (Note, of course, that the legendary comedy multiplier, and number 37 on this list, Joe Root, is lurking in the vicinity of this moment. No surprises there.)

And then there's always the dreaded funky captaincy, where Clarke seemed hellbent on contriving as many surprise declarations, bowling changes, batting orders or press conferences as he could, to the point where it was a surprise when he didn't do anything surprising. This perhaps peaked during the final Test of the 2013 Ashes where Pup unexpectedly declared at tea, setting England a difficult(ish) final session run chase, which they then just about succeeded in making, before the light was offered to Clarke, who took it.

So, you can see that Clarke has a very solid resume here. And that's even before you remember the time he did this:

And while off-field stuff isn't generally included as part of my methodology in determining this list (primarily to avoid a Shane Warne blowout), it's worth noting in passing the very high quality of Clarke's off-field comedy work – the feud with Simon Katich, the Lara Bingle engagement, the feud with Andrew Symonds, the tweet about how he was training while the rest of us slept, ate and partied, the feud with Shane Watson, the seasick Sydney-Hobart yacht race, the feud with Michael Hussey, that time where he didn't want to pass fitness tests so just made George Bailey his full-time stand-in captain instead, the feud with Darren Lehmann and so on and so forth and so on again.

And then, of course, there was this:

Michael Clarke's legendary stand-up bit that was so unfunny that it circled around to become utterly hilarious. Just like everything he ever did in cricket.

Like I say, I'm not completely certain about the decision to have Clarke in this list. But I'm not at all convinced I can't have him either. Ultimately, his record stands up.

So I'm slotting him in at Number 34 just to be done with him. Welcome aboard, Michael Clarke. You baffle me.

Previous: The thirty-fifth funniest cricketer of all time

Next: The thirty-third funniest cricketer of all time