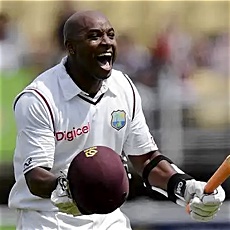 Of all the recurring comedy bits in cricket, the number eleven making a large number of runs is among the best.

It's enormously funny to see the frustration of the fielding team confronted with such an innings. They've completed 90% of their task, only to have it all undone by the least competent batsman in the opposition. What usually begins as a bit of a laugh ends up being totally maddening to the fielding team. And that's quality comedy.

There are two standout examples of such innings in the history of Test cricket here – Ashton Agar's 98 and Tino Best's 95 and they're pretty difficult to split in terms of how humorous they are.

On the one hand, Ashton Agar's 98 came in his very first Test innings, as a teenager, selected from nowhere to inexplicably replace Nathan Lyon in Darren Lehmann's first match as the new Australian coach.

He came to the crease with Australia in desperate trouble at 9/117 in pursuit of England's 215 in the first Test of an Ashes series, and departed having helped secure a 65 run lead on the first innings, in a Test that Australia ultimately lost.

Agar was then dropped after just one more Test and is yet to play again for Australia.

That's one hell of a comic innings. Is it really possible that Tino Best's 95 was funnier than that?

Perhaps. Because while everything about the situation Agar found himself in, and his reaction to it, is ostensibly funnier than Best's 95 (which was made in the first innings of a rain-ruined Test and which helped boost the total from an already respectable 9/283 to 426 all out), the fact is that Agar isn't really a proper number eleven batsman. And Tino Best, bless him, totally is.

Best averages just 12.53 in his 38 Test innings. Almost a quarter of his 401 career runs came from this one innings. He is a genuine bunny, in a way that Agar clearly isn't. And if the hilarity of the number eleven big innings is founded on their batting ineptitude, then Best has Agar well and truly, uh, bested.

But it's a close-run thing. The setup for Agar's 98 is so much stronger, but Best is the better purveyor of the comedy moment. If we slotted Best into Agar's Test match, then it wouldn't even be close. Especially since it would mean that we'd have a West Indian playing for Australia in an Ashes Test.

It's a genuine toss-up between the two, but I'm going to go for Tino Best. Because he once reacted to a piece of sledging by Andrew Flintoff by doing this.

Also, he wrote a book in which he claimed to have had sex with between 500 and 650 women. When Ashton Agar releases his autobiography and makes similar claims, then we'll reassess things.

For now, though, congratulations, Tino Best. You're the 33rd funniest cricketer of all time. And Ashton Agar, you're 33a.

Thanks, Ashton. I knew you'd be okay with that.

Previous: The thirty-fourth funniest cricketer of all time

Next: The thirty-second funniest cricketer of all time