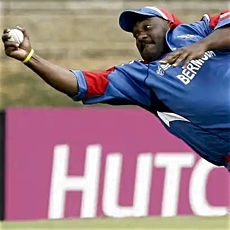 There are only going to be three cricketers who make the Funniest Forty list based primarily on how amusing their appearance is. We've already had Mohammad Irfan, who is comically tall. And now, here's Dwayne Leverock, who is comically, uh, big-boned.

Why is Leverock deemed funnier than Irfan? Or, indeed, any other comically stout cricketer?

Because he did this.

It's a fine catch even by the standards of, say, a Mark Waugh, leaping from a first slip position to take a catch that's flown off the edge to a non-existent second slip. The fact that it was taken by somebody who looks like Leverock makes it an instant classic. And the celebratory lap of honour is a superb comedy touch. A guard of honour as he walked back to his slip position for the next ball would have been a nice topper, but we can’t have everything.

A funny moment from a player whose appearance comically deviates from the norm? That's an instant spot on the list of the forty funniest cricketers of all time.

There will be one more entry that is strongly influenced by the player's humorous appearance. But that player also has multiple comic moments to their name. So we shan't be seeing them for a while.

For now, though, let's celebrate Dwayne Leverock, Bermuda's funniest ever cricketer and number 32 on the all time list.

Previous: The thirty-third funniest cricketer of all time

Next: The thirty-first funniest cricketer of all time