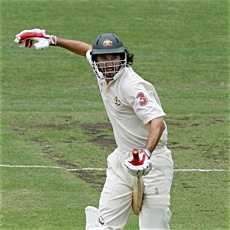 'Wait there, Dan,' you're probably saying. 'Jason Gillespie, the highly respected cricket coach and ethical and environmental vegan? How could he possibly be the thirtieth funniest cricketer of all time?'

And I know what you're thinking. It's because of his ongoing attempts to look like a second tier contender for the Westeros Throne. Some kind of long lost Baratheon sibling, perhaps?

But no, we're not even taking that into consideration. Instead, we're looking at his playing record.

Did you know, for example, that during the epic partnership between VVS Laxman and Rahul Dravid in 2001, Gillespie was reduced to running in to bowl, flapping his arms like a bird?

Because, hell, why not? Nothing the fuck else was working.

But his bowling was rarely the funnier side of his cricket. And nor, for that matter was his fielding, where his attempts to create a little bit of slapstick with Steve Waugh in Sri Lanka got way out of control.

No, Jason Gillespie is on this list because of his batting antics. There was the time against New Zealand in 2004 where he put on 114 in a last wicket partnership with Glenn McGrath, which culminated in Gillespie celebrating his 50 by riding his bat like an imaginary horse, a good decade before Mark Wood made headlines for his fictitious equine tendencies.

But of course, the batting effort that cements Gillespie's spot as the thirtieth funniest cricketer of all time is his 201 not out as nightwatchman against Bangladesh in 2006, a top score more than 10 times his batting average, a feat no Test batsman can claim.

The best thing about the double century was not only the fact that, in making it, Gillespie managed to achieve a higher Test score than that achieved by many of his more illustrious team mates, including Steve Waugh, Mark Waugh, Damien Martyn, Darren Lehmann, David Boon, Mike Hussey, et al.

No, not only did he beat their highest scores, he knew he was beating them and checked them all off with his batting partner Mike Hussey as he did so.

Gillespie never played another Test after that. And rightly so. Always best to go out on top of your comedy game.

Congratulations, Jason Gillespie. You're the thirtieth funniest Test cricketer in history. Now get back to being a very sensible coach.

Previous: The thirty-first funniest cricketer of all time

Next: The twenty-ninth funniest cricketer of all time