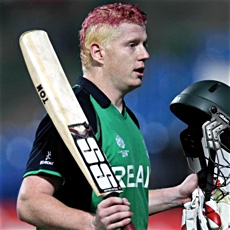 There are so many examples of England being hilariously inept at cricket - particularly World Cup cricket - that somebody should write an entire book about it.

But as entertaining as many of these efforts have been over the decades, it's often hard to pinpoint a particular individual for whom the comedy credit can be correctly assigned.

This was not the case in March, 2011, when Kevin O'Brien walked to the crease with his team, Ireland, four wickets down for just 106 runs in the 23rd over, chasing England's total of 328.

O'Brien then let loose with the fastest century in World Cup history. He took just fifty deliveries to get there, and was finally dismissed for 113 from 63 balls to give Ireland enough momentum to cruise to a famous and ludicrous victory.

The journey of the commentary helps make this effort so funny. It begins with kind of a surprised 'oh, isn't that adorable, he's having a hit' condescension, then progresses to standard 'admiration for O'Brien's courage in trying to salvage some respect in a doomed chase' before ending with Ravi Shastri moving into conventional 'I have utterly lost my shit at this' mode.

Oh, and did I mention that O'Brien also had inexplicable pink hair during this innings?

If Eddo Brandes or Logan Van Beek or Mohammad Mahmudullah or any of the other individual tormentors of England cricket over the years had thought to make their head just look a little bit sillier, they might have made this list. But they didn't. And O'Brien did.

But if you're not convinced that dyeing his hair a stupid colour should get O'Brien over the line here, consider also that O'Brien played in the 2007 World Cup match against Zimbabwe, in which he played a critical part in ensuring it ended in an amusing tie. Requiring just 15 runs from their last six overs to win with four wickets in hand, Zimbabwe somehow stumbled their way to needing nine runs from the last two overs with three wickets remaining, which was when O'Brien re-entered the attack. He proceeded to bowl a double wicket maiden, including a comical run out, to put Ireland on the brink of victory, before they, too, stumbled, ensuring the tie.

World Cup ties are funny, as we've seen before (and spoiler: will see later) in this list.

Previous: The thirtieth funniest cricketer of all time

Next: The twenty-eighth funniest cricketer of all time