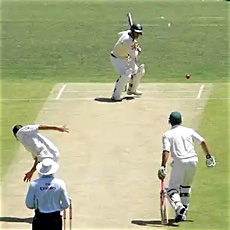 The 2005 Ashes series was among the greatest Test series ever played. One of the best teams the game has ever seen (plus Shaun Tait) went to England, where they met a home team finally willing to go toe to toe with them. Over five Tests, the challengers refused to back down against the champion Australian team, recovering from 1-0 down (and the brink of 2-0 down) to win back the Ashes 2-1, with the result only secured on the final day of the series, following a heroic 158 from Kevin Pietersen.

The series ignited cricket in England, with all the England players awarded MBEs for their Mighty Batting/Bowling Efforts (delete where appropriate). Such was the passion for cricket in England following the 2005 Ashes that it remains a constant source of bafflement as to why England haven't since chosen to go another 16 years without winning the Ashes. Perhaps they've tried, and the cunning Australians have simply outwitted them. In which case, excellent work, Michael Clarke.

So, naturally, when the England side returned to Australian shores eighteen months later to defend the urn, excitement for the series could not have been higher. The 2006/07 Ashes was easily the most-anticipated Test series in my lifetime, with everybody in world cricket, but particularly England and Australia, riveted to see what these two teams would do when they finally met again.

And it's this unprecedented level of anticipation, excitement and hope for another great Ashes series that makes Steve Harmison's first ball such a deliciously funny moment.

With all eyes on perhaps the most talked about first ball in a Test series ever, Steve Harmison pushed the ball well wide of Justin Langer, well wide of the keeper Geraint Jones and perfectly unwide of Andrew Flintoff at slip.

England then backed up Harmison's strong comedy instincts by going on to lose the 2006/07 Ashes 5-0. Now, despite Adelaide, the 2006/07 series is not as funny an Ashes whitewash as the 2013/14 series (and don't get me started on the gut-busting hilarity of 1920/21). There were too many cranky Australian champions hellbent on humiliating the upstart England team for the 2006/07 Ashes to ever match the bizarre, unexpected hilarity of the 2013/14 Ashes. But it had one hell of a start.

Special bonus: just to prove I'm not biased when it comes to mirth involving Steve Harmison Ashes moments, here he is, bowling Michael Clarke with a deliciously funny slower ball in the 2005 Ashes.

Great work, Steve Harmison. You've well and truly earned your spot as the 31st funniest cricketer of all time.

Previous: The thirty-second funniest cricketer of all time

Next: The thirtieth funniest cricketer of all time