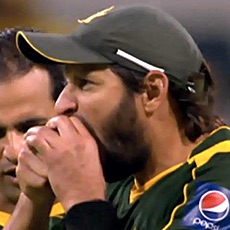 It's time for Shahid Afridi, the man cricket fans lovingly refer to as 'boom boom' because of his uncanny resemblance to Boris Becker (!!check before publishing!!).

From the very beginning of his career, Afridi worked in strong comic areas. In his first innings, Afridi broke the record for the fastest century in ODI cricket, bringing up a ton from just 37 balls. There are many reasons why this was brilliant. For one thing, he'd been selected in the team primarily as a sixteen year old leg-spinner (a specialist Pakistan position). For another, he scored the century after being sent in at number three as a pinch-hitter and getting almost impossibly carried away with the role.

It was as if Shahid Afridi had seen Ashton Agar's Test debut and decided to travel back in time to do it right.

Well, sort of. Because the other great comic attribute of Afridi's debut ton was that, despite it being scored in his first ODI innings, it was actually made in his second ODI match. This distinction gave us two decades (and counting) of pedantic 'well, actually'ing from Afridi scholars whenever the innings was almost inevitably erroneously described.

A quality start to a cricketing comedy career. And it only got better from there.

Over the rest of his career, Afridi showcased his comic craft with running gags of repeated retirements (astonishingly, he 'temporarily retired' more often than my spell-checker tried to change his name to 'Afraid' while writing this entry), age vagueness (Afridi ended the two decades of his international career somewhere between twelve and fifteen years older than when he began) and utter confusion about what, exactly, his role in any given cricket team should be (he averaged 23.57 with the bat and 34.51 with the ball across almost 400 ODIs).

Most funny cricketers would deem this humorously sufficient for a comedy career.

Not Afridi. Because the great man saw this as just a solidly humorous base. He went on to embellish this fantastically funny foundation with extra touches of comic genius along the way.

There was the time when he took the opportunity from a break in play as a result of a drinks machine gas canister explosion to scuff the pitch with his boots, an action caught by approximately twenty cameras, and he was therefore suspended for a Test and two ODIs for a level three breach of cricket's code of conduct relating to the spirit of the game.

Feel free to read that previous paragraph again and realise how magnificent this grand sport is.

He also remains the only cricketer to have played for Ireland, the Southern Redbacks and the Dhaka Gladiators (presumably).

And then, of course, there was the time he ate a cricket ball, a moment so utterly brilliant and mad that no more needs to be said about Afridi's comic prowess.

Shahid Afridi, you are a genuine cricket comedy great and deservedly the eighth funniest cricketer of all time. You're batting at nine in our Funniest Cricketers First XI, but we reserve the right to promote you as a pinch hitter in your second game (but only if you don't bat in the first).

Previous: The ninth funniest cricketer of all time

Next: The seventh funniest cricketer of all time