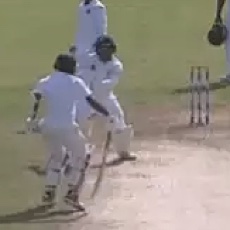 Well, this was always a possibility. You can't do a weekly(ish) countdown of the funniest cricketers of all time without running the risk that somebody will do something that arguably should earn them a place on the list, disrupting the entire process.

We had Misbah's push-ups. But luckily, Misbah was already on the list. So, while the push-ups should perhaps place him a little higher, that's not really a problem.

So let's just award him a 'Highly Commendable Effort in the Field of Comedy Cricket' award and be done with it.