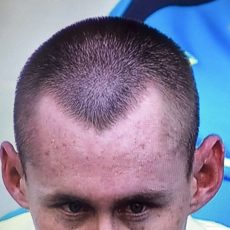 My Forty Funniest Cricketers list was always going to be a snapshot in time. After all, I seldom say sooths. My prowess at prophecy is paltry. My clairvoyancy capabilities are critically compromised.

In short, I glean future timelines as dimly as my misshapen corneas glean the present reality in which I primarily reside.

As such, my list did not contain any cricketers that emerged after the list was created. That's just chronological common sense.

All of which means that Marnus (no middle name) Labuschagne stands outside the list. Fittingly, I think.

We should have known Marnus was a promising prospect when he became the first cricketer to be penalised for 'fake fielding', while playing for Queensland against comic powerhouses CAXI.

He also began his Test career with one catch already in the bank thanks to a grab as a substitute fielder back in 2014. Always impressive when a cricketer has stats on the board prior to Test debut.

But none of that fully prepared us for Marnus's immediate impact on comedy cricket. In the first two Tests of his career, he's shown amazing promise and, frankly, he could be anything.

It's silly, of course, to get carried away with a cricketer based on just a couple of Tests. But, man, it's very, very difficult not to do so.

Marnus slotted straight into the team, being an integral part of Australia's First Test collapse of 10/60 in the first innings.

Indeed, at one stage he had the following, magnificently silly stats:

This from a man selected to bat at number six. It's as if a computer was programmed to come up with a comedy cricket powerhouse and had only one bit to specify each of the key data points.

Marnus has also already taken an impossible catch via his box and his knee.

He's also been run out, backing up too far and then being seemingly indifferent to the idea of grounding one's bat.

(Amazingly, not the single dumbest run out of the Test, because, of course, there was also this one.)

He has a fucken hairline in the shape of an 'M' for Marnus. I mean, come on, people. Get on board.

And his name is 'Marnus Labuschagne', which would be funny enough for your run-of-the-mill cricketer. But now just seems like a tossed-aside fillip, like a Picasso doodle.

Marnus Labuschagne, people. He's here and he could be anything, comedy-wise.