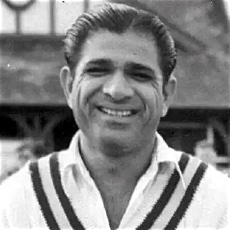 If there's one man synonymous with funny cricket, it's Vinoo Mankad, a man so funny that he gave his name to a wicket-taking ploy guaranteed to cause hilarity whenever it's successfully pulled off.

Mankad ran out Bill Brown, who was backing up too far during the Second Test of India's 1947/48 tour of Australia. This run out made everybody in Australia other than Don Bradman very angry indeed. But if Don Bradman – strong front-runner for the least funny person in the history of cricket – can appreciate your comedic antics, then surely we should all be able to do so.

There have, of course, been many mankads since Vinoo donated his name to the manoeuvre. And in almost all cases, the hilarity arises from the self-righteous bluster that Spirit of Cricket enthusiasts dredge up, with their arguments against the mankad generally reducing to something akin to Dennis Denuto's argument in the movie The Castle.

Why is it wrong to mankad?

It's the general vibe of the thing.

But, happily, the mankad hasn't been outlawed and, ultimately, never can be. It's funny enough that it's the kind of dismissal where people at least expect a warning before it's inflicted on them. And then, even after they've had the warning, still get upset about it.

The Jos Buttler mankad aroused such passion among many England commentators and fans that Paul Newman, Daily Mail columnist and salad dressing enthusiast, suggested parents should put their children up for adoption if they ever emulated the feat.

Which is perhaps the most hilarious response to a person being given out entirely within the Laws of the sport that I can imagine.

But even better, the West Indies Under 19 team won the hearts of the cricket comedy-loving world when they dispensed with all pretence of warnings and instead used the Mankad as a last-over weapon to snare the final Zimbabwean wicket during the U19 World Cup to earn themselves a place in the quarter-finals. They eventually went on to win the World Cup, but their true triumph came the moment Keemo Paul took Richard Ngarava's wicket.

Naturally, this wicket made people even more angry. Predictably, Jos Buttler called it 'embarrassing'. And, if anybody should know about how embarrassing it is to be mankaded, it's Jos.

Because ultimately, that's the best thing about people getting furious about Mankads: the underlying assumption that the non-striker can do nothing to prevent such an 'unsporting' wicket from happening. Whereas, in fact, the exact opposite is self-evidently true. The non-striker is in complete control, at all times, over whether or not he is a candidate for the Mankad.

Still, let's hope cricketers continue to ignore this truth, and mankads and their blustering aftermath continue to amuse us for decades to come.

Previous: The fortieth funniest cricketer of all time

Next: The thirty-eighth funniest cricketer of all time