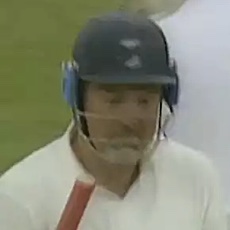 We've all seen the footage. Warne comes in to bowl his first ball in Ashes cricket. It swerves through the air towards leg stump. It bounces and turns with improbable sharpness, past the bat and into the off stump. Healy jumps in the air in delight. Richie utters a typically understated 'And he's done it'. Celebrations ensue.

And then we cut to Gatting's face.

Looking back at the stumps. Trying to work out what the fuck just happened. Whether he was actually out, or whether this was just Healy shenaniganing up a wicket-cheating storm. Then the raised eyebrows of surprise as he removes his gloves and begins to come to terms with the fact that he's somehow been bowled.

"Gatting has absolutely no idea what has happened to it."

And it's so obviously true. Gatting looks as if somebody took the search results for 'confused animated gif', morphed them all into one Super-Gif of Bafflement and then superimposed it back onto his face.

Gatting is now 59 years old. It's very possible he may still be unaware of what happened.

Warne would make fools of plenty of people over the next thirteen or so years of his career, not least himself. But Gatting will always be his most famous fool. Not just for the fact that he was dismissed by The Ball of the Century. But because his reaction to the dismissal was so perfectly befuddled and comical.

And, yes, you may argue it's too harsh to place Gatting as one of the funniest cricketers of all time simply because he showed surprise that one of the best deliveries in the history of cricket had dismissed him.

But that's not the only reason he's on this list.

Like gin and chocolate. Or peanut butter and tonic. It's the unique combination of utter head-shaking bemusement and wild finger-pointing fury that ensures Mike Gatting his place in comedy cricket history.

And I haven't even mentioned the time he tried to reverse sweep Allan Border and arguably cost England the 1987 cricket World Cup.

Bless you, Mike Gatting. You're an underrated comic treasure and comfortably the 26th funniest cricketer of all time.

Previous: The twenty-seventh funniest cricketer of all time

Next: The twenty-fifth funniest cricketer of all time