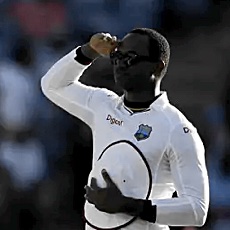 As will become more and more obvious the deeper we head into this list, players who seem only to play the game in order to irritate the opposition are among my very favourites in terms of comedy.

Marlon Samuels definitely fits into this role. Hell, Marlon doesn't play just to irritate the opposition. He's there to irritate teammates, spectators, umpires, administrators, journalists, commentators and, for all I know, himself.

And he does it splendidly. Whether it's being too cool to contribute in the field, or too cool to bowl with a proper action, or too cool to not give team information to bookies, Marlon is there, infuriating everybody with whom he interacts.

Even his statistics seem perfectly designed to annoy. At the time of writing, his Test, ODI and T20 batting averages are 33.22, 34.30 and 28.92 respectively. These numbers feel deliberately inflammatory – good enough to hint at talent, but not good enough to ever be fully relied upon.

And also throw in his two man of the match performances for the finals in the West Indies World T20 victories in 2012 and 2016 to hint at the kind of big match temperament that a team might be built around, if not for the fact that building a team around Marlon would be cricketing madness, even by the gloriously mental standards of recent West Indies cricket.

This is all solid stuff. But there are two specific instances of Marlon's provocation that assure him a spot on the list.

First, the saluting of Ben Stokes. Now, admittedly, irritating Ben Stokes feels like shooting furious flame-follicled fish in a barrel. But Marlon's not going to back down from something just because it's stupidly easy to do. Quite the reverse, in fact.

Needless to say, Samuels was also at the non-striker's end in that World T20 Final when Brathwaite hit Stokes for four sixes to win the game. Just there, being irritating. Thirty percent of match fee levels of irritating.

And, of course, this all works like nobody's business. Stokes is on record saying that Marlon Samuels is 'the one guy I cannot stand'.

Secondly, there's the time he drove Shane Warne batshit-insane during a Big Bash game in 2013, to the point where Warne threw a ball at him and Samuels threw a bat back at Warne.

He's continued to taunt Warne in press conferences ever since. Because, when you're Marlon Samuels, why the hell not?

Marlon Samuels also anagrams to 'slams one mural'. From anybody else, you'd think such an anagrammatic ridiculing of Warne's infamous artwork would be a coincidence. But, when it comes to Marlon, anything is possible.

Both Warne and Stokes will appear later in this list, of course. That's not too much of a spoiler, surely? And I will sing their comedy praises highly.

But for now, this is Marlon's time to shine. Because any man who has, just by being himself, driven two cricketing comedy legends to such hilarious heights of fury, certainly deserves a spot on the list of the funniest cricketers of all time. And twenty-fourth is as good as place as any to place him.

Previous: The twenty-fifth funniest cricketer of all time

Next: The twenty-third funniest cricketer of all time