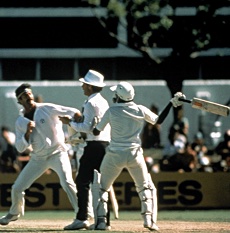 This one is very personal, so you're going to have to indulge me. We head all the way back to 1981, with the school year cruising to a lazy conclusion. On this particular 1981 day, little Danny Liebke and his Year 5 classmates were given the creative writing busy-work of writing a page of a newspaper set in the far-flung future.

I chose to write the back page for this futuristic newspaper. The story I covered? The tale of how Dennis Lillee the 16th kicked Javed Miandad's great-great-great-(times x)-grandson, with all the quirks and hilarious twists that the superior technology of that distant era would add to the mix.

Yes, Javed Miandad was my introduction to the notion that cricket could be funny. And I'm eternally grateful to the great man. I have no idea if he's accurately placed in this list or not – I'm too blinded by nostalgia to assess him properly. But I know for sure he should be somewhere on here.

Miandad niggled at an international level for more than twenty years, from his ODI debut in 1975 to his final ODI in 1996, and while not all that niggling was hilarious, a couple of decades of sustained irritation of the opposition adds up.

For example, it's a well-known fact that he was never given out LBW in Pakistan. So well-known is this fact that nobody cares that it's not true. Because it feels just about annoying enough to be right.

And while most of Miandad's career was a slow accumulation of such amusing annoyances, I was able to find a couple of specific highlights.

But the true moment for which Miandad makes the list is the one that tickled my ten year old self so. Here he is, driving Dennis Lillee insane to the point where he kicked him.

And while we've established that pretty much every Australian in that era was genuinely crazy, the man who triggered the most memorably funny overreaction from those lunatics was Javed. Or, at least, that's how I remember it.

And because it's my damn list, that's enough to make Javed Miandad the twenty-second funniest cricketer of all time. Deal with it.

Previous: The twenty-third funniest cricketer of all time

Next: The twenty-first funniest cricketer of all time