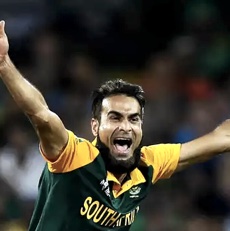 South Africa have had funny leg-spinners before.

South Africa have had exuberant celebrations before.

But when the two blend together we get something more amusingly irritating and/or irritatingly amusing than the sum of its parts.

In short, we get Imran Tahir.

Sadly, most of the videos of Tahir celebrating seem to have been taken down to copyright violations, presumably on order of Tahir himself, who has trademarked his wicket-taking antics.

But a search of images of Imran Tahir celebrating gives you the general idea.

Why are Tahir's over-the-top celebrations so annoying? Well, surely it's because of the absurd lack of perspective to them. If every wicket's worthy of a sprint to the boundary, a thumping of the chest and a fist raised in triumph, then surely none of them are.

I mean, what will he do if he ever takes the wicket that wins South Africa a World Cup? (An obviously hypothetical scenario, but bear with me). Does he have to literally drop dead of glee at that point?

Still, credit to Tahir for being so maddening. I find his jubilation utterly infuriating and I'm just watching him on television. Imagine having been dismissed by the man. You'd want to take a cricket bat upside his head. And it's a magnificent testament to his skill that he's still able to take wickets when his asinine antics must ensure he's the bowler that batsmen least want to be dismissed by in world cricket.

I've suggested previously that the only sane response to Tahir's nonsense celebrations would be for players batting against him to commemorate every run like he does a wicket.

Take a single, high-five your batting partner. Scamper a two, race around the circle, arms raised in triumph. Crash a four, have a cake delivered to you. And so forth.

Would it stop him? No, of course not. But it would at least balance the scales somewhat. At least until he escalated his jubilation to even more preposterous heights.

But it's not just the ridiculous revelry that has earned Tahir a spot in the forty funniest cricketers of all time.

There was also the time he secured South Africa a draw by heroically cramping. With stumps looming, Tahir collapsed in apparent agony, suffering from cramps from his epic innings of 21 balls. South Africa escaped with a draw and a series win.

And then, of course, there's Tahir’s Test debut. He was called up to the South African Test team in 2010 when England where touring, only to be called back down when it was revealed he wasn't eligible to play for them until 2011. A classic bit of debut absurdity, you'd think.

Luckily, he topped it when he actually debuted against Australia, by taking the worst ever Test debut figures of 0/260. Great work from Tahir to have a worse Test debut in the Test he did play than the one where he didn't play.

Still, perhaps these stark demonstrations that wickets and, indeed, entire games can be taken from him at any moment is why he overcompensates so much whenever he takes wickets these days.

It's a plausible explanation, I guess, but it's certainly no excuse.

Regardless, Imran Tahir is the eighteenth funniest cricketer of all time. I hope he's celebrating inappropriately.

Previous: The nineteenth funniest cricketer of all time

Next: The seventeenth funniest cricketer of all time