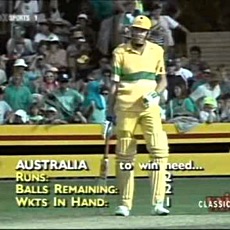 Bruce Reid was an excellent Australian fast bowler who specialised in being maddeningly injured a quarter of a century before Pat Cummins was even invented.

He also managed two of the great final over comedy moments in limited over cricket history.

The first was with the ball. In 1986/7, a chase of 234 runs off fifty overs was considered highly challenging. And certainly, in this particular game, England had found themselves highly challenged indeed, as they'd inched their way to a total of 7/216 from 49 overs.

The cornerstone, and up until that point millstone, of the chase had been Allan Lamb, who had made 58 (97) in a display that possessed a quiet comedy of its own. Seemingly oblivious to the requirements of the chase, Lamb had eschewed boundaries through his entire innings as he manoeuvred his team to the point where they required 18 off the final over.

This wasn't the T20 era when Carlos Brathwaite would make such a task seem utterly beneath him. This was the mid-1980s. And with Bruce Reid bowling the final over, Australia were as good as home. Right?

Uh, wrong. The first ball was bunted through the off side for an awkward two. The second ball? Hoiked behind square leg for four, Lamb's first boundary. He followed that up next ball with his first six, lofting it over cow corner and into the crowd. The next ball – a single. Or, y'know, what should have been a single. But an overthrow as Reid fumbled the return throw from Dirk Wellham made it two, bringing Lamb back on strike, where he finished the chase with a four from the next delivery to win with a ball to spare.

It was a miraculous win for its day, with Reid totally incapable of defending a total that seemed perfectly safe.

But maybe that one doesn't age so well. Failing to defend eighteen off the last over of an innings? Meh. All kinds of bowlers fail to do that these days.

Because in this one, from 1990/91, Reid had bat in hand. And Reid with bat in hand was designed for comedy. Again, we're in the last over an ODI. This time, Reid needs to score two runs to win. Or just the one run to tie.

How many does he score?

And then he runs himself out off the last ball half-heartedly trying to take the match-levelling bye.

Bless you, Bruce Reid. For your delicious all-round last over efforts, you're the seventeenth funniest cricketer of all time.

Previous: The eighteenth funniest cricketer of all time

Next: The sixteenth funniest cricketer of all time