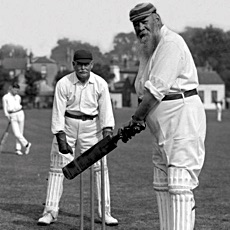 Right. Let's go all the way back. To W G Grace, the man who invented funny cricket, what with his silly beard, his insistence on claiming he was a doctor and his legendary willingness to brazenly cheat.

Obviously, it's the cheating that stands out for us here. Lets go through some of the antics that the good doctor perpetrated on a cricket field, shall we?

He was the most well-paid 'amateur' in the game, often refusing to tour if some kind of monetary compensation couldn't be found.

He stole a player from the Australian side and forced him to play for Gloucestershire, in a mind-boggling act of cruelty.

He was accused of betting on games he played.

He once set fire to a bowler's shoes and when the quick complained, had him escorted from the ground.

He ran out an opposition batsman when he went down the pitch to do some gardening and in the process inspired the entire Ashes legend.

He invented the doosra, but bowled it with what scientists of the day (including the creator of electromagnetism, James Clerk 'Glenn' Maxwell) estimated was at least a twenty degree straightening of the arm.

And, of course, most legendarily of all, he refused to leave the crease when bowled and/or given out LBW because people had 'come to see me bat, not you umpire/bowl'. (Bizarrely, part-time optometrist Geoff Lawson was the modern batsman who best tried to emulate this effort - what is it with medically trained cricketers?).

Look. Not all of those claims are true. It all happened a long time ago and history is a muddy business. But to do even some of those things and still be revered by the kind of English cricket fans who tut-tut a mankad makes W G Grace a true comedy hero.

Hell, he's literally the face of God in Monty Python and the Holy Grail.

If that's not enough to earn you a spot as the twelfth funniest cricketer of all time, I don't know what it is.

Previous: The thirteenth funniest cricketer of all time

Next: The eleventh funniest cricketer of all time