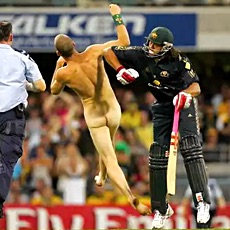 It's time for Andrew Symonds, affectionately nicknamed 'Roy', because it was short for the anagram version of his name 'Roy mends wands', a reference to his earlier career working the back rooms of Ollivanders, down in Diagon Alley South.

But while Symonds effortlessly worked magic in the Harry Potterverse, it took him longer to unveil similar wizardry in cricket. It's difficult to remember now, but for the early portion of his career, he was in direct competition with the likes of Ian 'The Freak' Harvey and Shane '(sigh) Yes, Brett's Brother' Lee for the Australian ODI all-rounder spot. It wasn't until Shane Warne got himself suspended just before the 2003 World Cup that Symonds finally unlocked the cricketing prowess buried within him. He scored 143 not out in Australia's first game to guide Australia to a win and, eventually, an undefeated tournament, leaving The Freak and Brett's Brother behind forever.

But we're not here to talk about Andrew Symonds' cricketing career, as strange as it may have been. We're here to talk about how funny his cricket was. And, again, we can credit Warne for triggering Roy's ascension in this area. Because, like Warne, Symonds did most of his best comedy work off the field.

There was, for example, the time he went fishing with Matt Hayden, only for their boat to capsize, forcing the pair to swim to shore through what any competent wielder of anecdotes would insist was 'shark-infested waters'.

This mishap didn't put him off fishing, though, because he was later suspended from games against Bangladesh in Darwin, because he was too busy casting a rod to attend a team meeting.

And nor was it just Northern Territory-based angling that Symonds preferred over playing ODIs against Bangladesh. He also preferred getting shit-faced in Wales over playing them, memorably being sent back to the hotel after showing up drunk to the pre-game warm-up for a Cardiff ODI in 2005.

And, of course, his career ended just prior to the ICC World T20 in 2009 after a (presumably different) alcohol incident that resulted in him being sent home from the tournament.

But, hey, we've already established that off-field antics don't count for this funny cricketer countdown. Because, as comically impressive as Symonds' mishaps were (let's never forget that he also once called Brendon McCullum a 'lump of shit' on radio (not to be confused with a lump of 'shit on radio')), Warne still has him well and truly covered.

So let's focus on the funny things Symonds did on the field. There was this:

Notice how it's close friend Michael Clarke bringing Symonds undone here, in an eerie precursor to the role Pup would eventually play on a career level. And, of course, we also have Symonds suggesting that Clarke owes him a drink as a result. All we needed was Dilshan reeling in the catch with a fishing rod for this dismissal to be a perfect microcosm of Symonds' entire career.

But, while that's an amusing dismissal - as Mark Nicholas said in commentary 'you've just got to have a giggle' - it's not what you're here for, is it?

No, the on-field moment that single-handedly, or perhaps single-shoulderedly, earns Andrew Symonds a spot in this list is, of course, this one:

I was there at the Gabba watching this game. In theory, I was there to watch Adam Gilchrist's final match for Australia. But in one moment of shoulder-charged brutality against a streaker, I realised I was there for something greater. The thunderous roar of the crowd as Symonds felled the strange, nude man running towards him told me I was there for an infinitely more important moment.

The moment that secured Andrew Symonds' spot as the eleventh funniest cricketer of all time.

He'll bat at six in our Funniest Cricketers First XI.

Previous: The twelfth funniest cricketer of all time

Next: The tenth funniest cricketer of all time