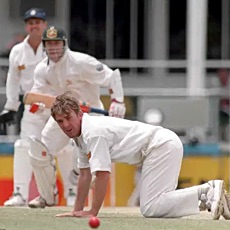 Terrible fielding is a cornerstone of cricketing comedy. Dropped catches. Botched run outs. Overthrows. Picking a fight with SpiderCam. It's all quality stuff.

Any player, no matter how good, can have a momentary lapse in the field and produce a little gem of slapstick.

Here, for example, is the great Michael Hussey clowning about.

But while the occasional one-off gag is fine, it takes a special cricketer to maintain consistent standards of hilarious fielding. There are a few players who spring to mind here - Kamran Akmal, for example. But as solidly amusing as Akmal and others of his ilk have been over the years, there is one player whose name is synonymous with rubbish fielding.

In 1990/91, Phil Tufnell toured Australia, ostensibly as a spinner. But what became immediately clear as he made his way around the cricket grounds of Australia that summer was that this was a man with a unique gift for botching every chance that came his way in the field.

Here he is, failing to complete a run out - perhaps the peak of his shambolic efforts on that tour. Naturally, the run out opportunity is created by inept running between the wickets by the Waugh twins, a solid running gag by this time. But, as comic as that set-up is, it's Tufnell's genius fumble that provides the punchline.

Perhaps the greatest tribute to Tufnell's hopelessness in the field came during an episode of Hey, Hey It's Saturday, a variety show that, to our eternal shame, was the peak of Australian television comedy in that era. Here, 'The Music Men' choose Tufnell's bungling fielding as the punchline for their terrible, terrible skit.

But ponder that - Tufnell's fielding was so infamously terrible that it transcended cricket fandom and became primetime fodder for what passed for early 90s entertainment for Bruce and Sheila Average.

And while Tufnell would make the list for his fielding alone, the fact that his batting was almost as abominable seals his spot.

Here, for example, is how he pads away Shane Warne bowling around the wicket.

Solid ineptitude. And a reminder that one of the things that makes cricket such a gloriously funny sport is the enforced imposition of second-rate skills into elite international fixtures.

Bless you, cricket. And bless you, Phil Tufnell. You are the tenth funniest cricketer of all time.

Tuffers, obviously, will bat at eleven in our Funniest Cricketers First XI.

Previous: The eleventh funniest cricketer of all time

Next: The ninth funniest cricketer of all time