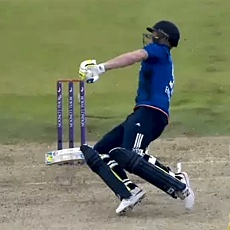 Perhaps the best thing about the fourth funniest cricketer of all time, Ben Stokes, is that he probably wouldn't find a single thing he's done in his spectacular comedy cricket career amusing in any way.

Indeed, you get the sense that he'd be furious that anybody would even consider a single one of the events I'm about to list a subject of mirth. I've previously described Ben Stokes as being fuelled by a combination of Red Bull, inexplicable rage and imminent heatstroke. And of those three sources of cricketing nourishment, it's clearly the middle one that's doing the heavy lifting.

And, of course, the beautiful thing about this simmering anger that powers the great man is that it just makes every ridiculous thing he does all the funnier.

From the very beginning of his Test career, you got the sense that Stokes was a cricketing comedian of rare quality. He debuted in the middle of England's still mystifying 0-5 Ashes defeat in 2013-14 and impressed immediately when his first Test wicket (fellow Funny Cricketer Brad Haddin) was taken from him due to a no ball.

This did not make Ben happy.

Ben continued to be not happy in the West Indies in 2014. So not happy was he that he punched a locker after being dismissed for a duck. The subsequent hand injury saw him ruled out of the 2014 World T20.

This also did not make Ben happy.

Luckily, he would get another chance at a World T20 a couple of years later. But does anybody want to guess how Ben felt at the end of that particular tournament, famously won by Carlos Brathwaite hitting Stokes for four consecutive sixes off the last over of the final?

In between these events, Stokes had many triumphs, establishing himself as one of the finest all-rounders in world cricket. He hit mind-boggling centuries and double centuries. He took unplayable five-wicket hauls. He snared catches that most cricketers would not even process as chances.

But the success of Stokes is rarely amusing. If you want a list of the forty unfunniest but otherwise really rather impressively skilful and good cricket moments, you'll have to go to a different web site.

Indeed, I can think of only one moment when Ben Stokes was happy in an amusing fashion. And that was when he emerged, delighted, on the team balcony, to applaud his captain Alastair Cook's 10,000th Test run. Stokes wasn't playing in the Test due to injury, which made his presence somewhat bizarre.

Of course, what made it even more bizarre was that he curiously also had no pants on.

As I say, that's the one time a happy Stokes was funny. So instead, let's continue to focus on the funny moments that made Ben unhappy.

Continuing the pantsless theme, there was the time against South Africa when he appeared to injure himself while fielding and losing his pants.

Was Ben happy about this? No, he was not.

He also wasn't particularly happy when for a period of about three months prior to the 2015 World Cup he completely forgot how to play cricket. No evidence has ever been offered as to why this happened, but it did. All traces of cricketing ability simply left his body for a sufficiently long time that England were left with no choice but to exclude him from their final squad for that particular doomed campaign.

This did not make Ben happy.

Was he happy when a ball boy threw a ball back to him and hit him in the face?

No, Ben was not happy.

Was Ben happy in the 2015 Ashes when he managed to be run out for a duck as Australia ran rampant at Lord's, leaping into the air to get out of the way of Mitchell Johnson's throw?

Nope. (Although notice that legendary comedy multiplier Joe Root was in the vicinity, magnifying the funniness of the moment.)

And, of course, perhaps the apex of Ben Stokes being unhappy when something very funny happened to him was the time he was given out obstructing the field when he 'instinctively, but not wilfully' parried away Mitchell Starc's attempt to run him out.

I've got 800 words on the hilariousness of that particular incident elsewhere. Go read them if you want to relive one of the very funniest moments in recent cricketing history.

I'm sure there are countless other funny moments where Ben Stokes was furious about something. But that'll do for now.

Despite - or, more accurately, because of - how angry it will make him, I'm very pleased to be able to award Ben Stokes the ranking of the fourth funniest cricketer of all time.

And, given how much of his cricketing comedy career remains ahead of him, there's a very real possibility that Stokes will end his career as the funniest of them all.

That'll piss him right off.

Stokes will bat at a fury-inducing eight in our Funniest Cricketers' First XI. But he will share the new ball. I'm very confident he'll do something absurd with it.

Previous: The fifth funniest cricketer of all time

Next: The third funniest cricketer of all time