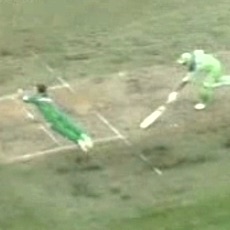 The run out is the funniest dismissal in cricket.

Sure, a handled the ball or obstructing the field (which, as I understand it, are now one and the same in the crazed minds of the ICC) is always an amusing moment too. But they're so rare. Which is arguably the source of most of their comedy.

A disputed catch that gets everybody all riled up – that's funny, too.

A batsman yorked off their feet - sure, that'll work.

A hit wicket can be quite funny, especially the moment when the fielding side suddenly notices the bail has fallen on the ground.

And, heck, in the modern era, there's something to be said for the absurd LBW review.

But it's the run out that rightly gets the bulk of the comic accolades. For one thing, it's so versatile. You have your mankads - technically a form of run out - that are so funny they have their own entry in this list. You have your 'run out at the bowler's end backing up too far', which television commentators seem contractually obligated to describe as 'the unluckiest form of dismissal' despite the fact that Xavier Doherty has seven Test wickets. You have the 'run out where both batsmen are sprinting to the same end', always a wonderful display of pure, unfettered selfishness in what is ostensibly a team game. And then there's the 'holy fuck, why is Lance Klusener suddenly standing beside me?' run out, one of my personal favourites.

All fantastic exotic variations of the basic form. But even without those variations, the standard 'yes, no, wait, sorry' form of the run out is a solid comic bit.

And the undisputed king of that comic bit was Inzamam-ul-Haq. Sure, others may have been technically run out 'more often' than Inzy. But that's just numbers. And numbers are for the weak of heart.

Inzy was run out better than anybody else in the history of the game. Look, I'll show you:

Here's Inzamam just failing to retire hurt before being run out

I could go on. But to save time, here he is being run out 23 times in one YouTube clip.

You can't argue with that sustained level of run out comedy prowess over an entire career. The run out is the funniest dismissal in cricket. Inzamam is the finest ever exponent of the run out. Ergo, Inzamam is one of the funniest cricketers in the history of the sport.

And lest you think he's a one trick pony, here's Inzamam pulling out an obstructing the field.

And, of course, he dabbled in some hit wicket material as well.

And, like all Pakistan players, he was for a brief period of time the team captain. Needless to say, during that period he combined with Darrell Hair - strong contender for Funniest Umpire of All Time – to forfeit a Test.

But as amusing as those forays into other forms of silliness might have been, it's his epic career as a master of being run out that earns Inzy the coveted number three slot on the list of the funniest cricketers of all time.

Inzamam will bat at four in our Funniest Cricketers' First XI. He'll be involved in a mix-up with KP, who'll claim he didn't hear the call, that will find Inzy well short of his ground. He will trudge off very slowly.

Previous: The fourth funniest cricketer of all time

Next: The second funniest cricketer of all time