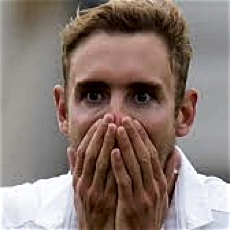 Every now and then, somebody will do a similar countdown to this one but based on the far less important cricketing skill of batting. And, if the creators of those lists are English and desperate for the kind of controversy that generates plenty of views of their #content, they'll occasionally put somebody other than Bradman first.

Oh, sure. They'll come up with their 'reasons' for why W G Grace or Sachin Tendulkar or Paul Collingwood is the superior choice to Bradman as the best batsman ever. And they'll offer those explanations with seemingly zero regard to the fact that statistics is an entire branch of mathematics, complete with rigorous definitions and proofs and all the other guff that goes along with branches of mathematics. And when a dude is several standard deviations ahead of everybody else by the usual measure of prowess in a field, then that dude is the best, okay? Just stop with your list-fudging. It's silly and tediously petty.

But, hell, I can be silly and tediously petty too. If tapping into Anglo-Australian rivalry with ludicrous manipulation of rankings gets people talking about what you've written, then I'll play along.

So, look. Stuart Broad is obviously the funniest cricketer of all time. Everybody knew that when I started this list and nothing has changed in the intervening six and a half years. But I'm putting him at number two so this content will go #viral. Please share to make this tactic worthwhile. It's what Stuart would want.

Now let's get on with it.

For a long time, until mid-2013, I didn't appreciate Broad's comic genius. I was like one of those US conservatives who sincerely embraced the reasoning of Stephen Colbert. Or an 18th Century Irishman genuinely outraged by Jonathan Swift's recommendation that the rich should eat the children of the poor. Or a fan of Coldplay.

In my defence, I hadn't really paid too much attention to Broad. And at a casual glance, his comedy antics seemed limited to a) challenging the underpinnings of the English selection policy by interspersing his good bowling performances with ever-increasing stretches of terrible ones and b) looking like Draco Malfoy.