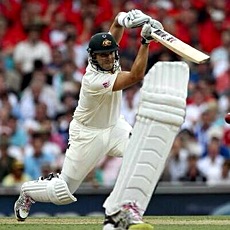 The LBW law was invented in 1774. For a little over two and a quarter centuries, its comic potential went mostly untapped, despite the best efforts of Terry Alderman and Graham Gooch.

Run outs were the preferred form of comedy dismissal, and all up-and-coming funny cricketers were urged by their comic coaches to work hard on their terrible calling and fatal indecision. Obviously, not everybody could be an Inzamam-ul-Haq, but the run out was still the most fertile cricketing field to comedically till, especially for youngsters just starting out on their cricket career.

And then, out of nowhere, a fresh-faced comedy genius burst onto the scene pad-first and turned funny cricket on its head.

Watson had grown up in one of the grimmest periods of cricket in history, forced to watch as Steve Waugh's team stone-facedly crushed everybody who dared oppose them.

That kind of humourless reign of terror would never happen again. Not on Watto's watch.

Here he is, wielding his front pad in the manner that would become his trademark.

But, of course, it wasn't just the LBWs themselves that made Watson so consistently hilarious. No, Watson was lucky enough to be a child of the DRS era. And no batsman wielded DRS with as much comic surety as Watto.

The LBW-Review-Decision Upheld routine was a 1-2-3 punch that never grew tired. Indeed, like Sideshow Bob stepping on a rake, it somehow grew funnier each time Watson managed to pull it off.

And he committed to the bit.

Because it wasn't just the dismissals that were hilarious. It was also Watson's response to them. The sad shake of the head. The slumped shoulders as he Charlie Browned his way out of there.

Watto LBWed and reviewed right to the very end of his Test career, with his final Test in Cardiff - which I was lucky enough to attend - perfectly topped by a pair of such dismissals.

But Watto had more than just LBW dismissals up his bicep-riddled sleeve.

Just because he'd more or less invented a whole new form of cricket comedy based around the LBW Law, that didn't mean he'd neglected the more traditional forms of funny dismissals.

Quite the reverse. Watto effortlessly excelled at those more orthodox comic bits.

Here he is, being run out with himself and Simon Katich at the same end. This is always one of my very favourite forms of dismissal. The selfishness as both batsmen squabble for the safety of the one crease, like a cricketing version of musical chairs, completely highlights the lie that cricket is a team sport.

And here he is being run out from a dropped catch. Like a goddamn hero.

And even when his wicket didn't fall, Watto somehow made batting funny. Here's how he brought up his first Test century.

Because why not do so via a dropped catch?

And we shouldn't forget that Watson was also a bowler. Because he didn't muck about in bringing comedy to that aspect of his game as well.

Listen to Healy (I know, I know - bear with me) in this clip, calling Shane Watson's first ever ball in Test cricket. "He's demonstrated he can stay on his feet at domestic level," Healy says in commentary. Watson, somehow, gleans that this is an opportunity for some slapstick and immediately falls over.

Remember when he celebrated the wicket of Chris Gayle in hilariously obnoxious fashion?

All for our benefit.

Did Watto deliver the laughs in the field?

What do you think?

Even in the field, Watto can get his legs in front of the stumps.

Notice, of course, that it's Michael Clarke who senselessly hurls the ball into Watson here. Hardly surprising, especially when you remember that Watto was the one person in the Australian cricket team that Pup didn't get along with. (note to self: almost certain of this – but check before posting that there was nobody else who Pup feuded with)

The pair's uneasy relationship peaked on the infamous HomeworkGate tour of India, where Watto, along with fellow bad boys James Pattinson, Mitchell Johnson and Usman Khawaja were dropped from the Third Test for failing to complete their homework.

Watto reacted to the axing in perfect fashion. Which is to say, he immediately flew home for the birth of his first child and then returned to captain Australia in the very next Test after Pup succumbed to one of his inevitable injuries.

Needless to say, Watson's captaincy was as funny as the rest of his game. Legendarily, he opened the batting and the bowling with fellow funny cricketing legend Glenn Tiberius Maxwell. Indeed, there is a case to be made (and I've made it), that Watto is Australia's greatest ever captain.

And while we don't usually include off-field antics in the funniest cricketer entries, an exception must surely be made for a man who turned an Ashes tour into an episode of Scooby Doo by being so terrified of a ghost at Lumley castle that he spent the night in Brett Lee's room. Zoinks!

King Watto will open in our Funniest Cricketer of All Time XI. You all know exactly what will happen next.

Previous: The second funniest cricketer of all time

Next: The funniest cricketer of all time